Tapio™ is a direct connect, Lightning fast, dual switch interface that's suitable for everyday access, but can fly with any warp speed gamer.

With Tapio and an adaptive switch, a single switch user can have complete access to an iPad, an iPhone or an iPod touch, using Apple's new Switch Control feature in iOS7. A single switch scanner really can move the highlight to an app on the home screen, launch it, and scan to controls within the app. All that's left is to plug an appropriate adaptive switch into Tapio, and attach it to an iOS Device using an Apple dock adapter.

Switch Control provides revolutionary access to the iOS touch interface that until now was only a dream.

The beauty of a robust direct connection is there are no wireless worries with Bluetooth pairing, drop-outs, and sluggish connections. Forget about charging batteries too, Tapio sips power direct from the iPad's dock port.

Tapio is a native USB switch interface that can be connected to an Apple iOS Device using an Apple USB camera adapter.  Choose Lightning, Lightning with a recharge port, or USB C. It accepts industry standard 3.5 mm stereo or mono plugs, and directly interfaces up to two adaptive switches to an Apple iOS Device or computer. Tapio is powered from the device, and does not require external power. Tapio uses standard USB Human Interface Device (HID) drivers and works with iOS Devices, Windows, Macintosh and Linux computers, and many Alternative and Augmentative Communication (AAC) devices.

A note about Compatibility:

Apple iOS Devices have worked with direct connect USB keyboards since the early days of iPhone. However, Apple only officially supports Bluetooth keyboards. For this reason whenever you plug a USB keyboard into an iOS Device, or turn on an iOS Device with USB keyboard connected you will receive a notification or message telling you that it is not supported.

Since Tapio presents itself as a USB keyboard, you will see a dialog asking to confirm it. Simply tap OK directly or scan to and "tap" OK to dismiss the dialog box.

(SW4 is reserved and should be ON.)

Outputs describes the keyboard keys, mouse buttons, or joystick buttons that are sent when the first and second adaptive switches are actuated. In most cases one key is sent in two cases (RJ and Rich Modes) two keys are sent in quick succession.

For Full Duration timing, Tapio holds the keyboard key down as long as the associated adaptive switch is held down. 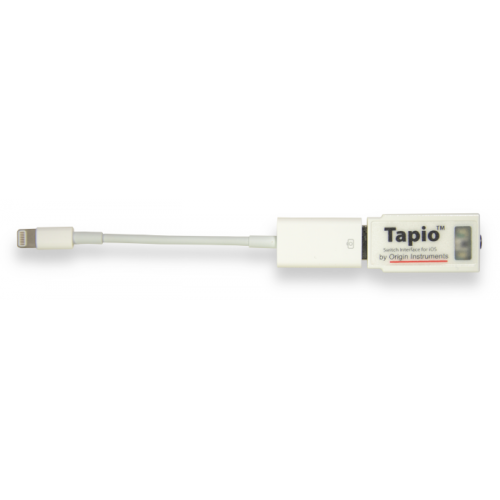